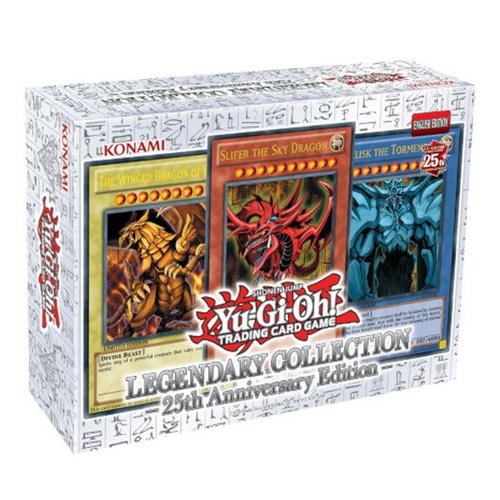 One of the most storied Yu-Gi-Oh! TRADING CARD GAME items returns for the 25th anniversary of the card game!

One of the most storied Yu-Gi-Oh! TRADING CARD GAME items returns for the 25th anniversary of the card game!

The very first Yu-Gi-Oh! TRADING CARD GAME Legendary Collection is reborn as Legendary Collection: 25th Anniversary Edition! It contains 6 Booster Packs and 6 Ultra Cards, including special variant cards of some of the most famous monsters from the original anime series.

In addition to the 6 Ultra Rare cards, which include the highly requested and sought-after original Egyptian God Card Promos, the 25th Anniversary Edition will include a bonus 7th card! This 7th card will offer Duelists a sneak peek at a brand-new rarity created just for the 25th anniversary celebrations: The Quarter Century Secret Rare!

Each Legendary Collection: 25thAnniversary Edition will include 1 random Quarter Century Secret Rare version of 1 of the 6 special variant cards to give Duelists a taste of what’s to come!

Close
0 stars based on 0 reviews
0 Reviews
All reviews
Add your reviewAdd your review
Reviews
Close
No reviews found...
Let me know when Legendary Collection: 25th Anniversary Edition Yu-Gi-Oh! is back in stock!
Leave your information and you will be notified when it is back in stock.
Close
Compare products
0
Start comparison
Please accept cookies to help us improve this website Is this OK? YesNoMore on cookies »